As part of the implementation of ATAD 1, so-called ”CFC rules” have been introduced in the Netherlands as per January 1, 2019. As a result foreign operations of Dutch tax payers could become subject to additional Dutch corporate income taxation. To fall under the scope of the CFC legislation, the activities must take place in a country listed on the EU non-cooperative countries list and/or on the Dutch list of low taxed countries. On March 12, 2019 the EU updated their list of non-cooperative countries. As such 10 more countries are blacklisted by the EU.

Dutch CFC legislation in general as per January 1, 2019

An entity will be considered a CFC if:
(i) a Dutch taxpayer (in)directly holds an interest exceeding 50% (in vote or value) in a foreign entity or branch; AND

(ii) the income of this entity or branch consists of more than 30% passive income; AND 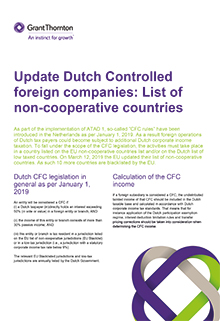