Traditionally on the third Tuesday of September, the Dutch government proposes its Tax Plan (Belastingplan) and other important tax measures for the coming years to the Parliament. This Tax Alert will highlight the proposals which are important for international companies. Please read this alert and see if the tax position of your international company will change in the next years. 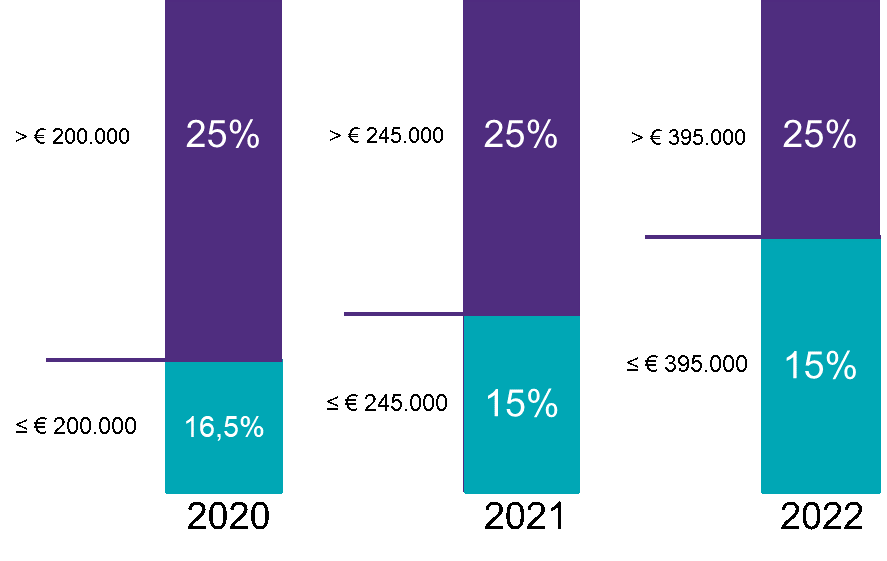 Dutch corporate income tax law includes a preferential regime to promote activities related to investments in innovative activities. This is the Innovation Box regime. For profits meeting the requirements of the innovation box, companies are subject to a reduced corporate income tax rate. On Budget Day 2020, it is announced that the effective rate of the innovation box will increase from 7% to 9% as per January 1, 2021.

In Dutch corporate income tax law there is a specific restriction on costs and currency results regarding intra-group loans which are used for a so-called ‘tainted transaction’ (for example the acquisition of a participation). Considering the fact that positive results for example foreign exchange gains) are also covered by this rule, it is possible that in practice there is an exemption instead of limitation on the deduction. This rule will be adjusted so that the exemption cannot exceed the deduction limitation. The assessment will take place on a loan-by-loan basis.

Under the Corona Crisis Decree, companies subject to corporate income tax have the possibility to create a corona reserve in 2019 for the losses they are expected to incur in 2020 as a result of the corona crisis. On Budget Day 2020 it was announced that this rule will be implemented into legislation.

By creating a fiscal corona reserve, a company can already compensate a 2020 loss in 2019. This is earlier than under the regular loss compensation rules.

A new measure to stimulate companies that make investments in the Netherlands, is the so called job related investment discount. Under the new measure a percentage of investments made by companies can be deducted from the Dutch wage tax payable. The measure is a temporary measure. The Dutch government will propose a long-term measure with a similar objective at a later stage.

Another measure announced by the government concerns the CO2 tax for companies with installation which are subject to the European Emissions Trading System. Based on the legislative proposal, companies may emit a certain exempt amount of CO2. All CO2 emissions above this threshold will be subject to CO2 taxation. With this measure, the government aims to achieve the objects of the Paris Climate Agreement.

Currently, all tax losses can be carried backwards for one year can be carried forward for a period of six years. On Budget Day 2020, the government announced that it will propose to amend these rules. The government plan specifies that starting from 2022, tax losses can be carried forward indefinitely. However, there will be a limit to the amount of losses which can be offset. If the plans will be implemented into legislation, tax loss compensation will be made dependent upon the taxable profit of the year concerned. Profits up to € 1 million can be fully used to set off losses. In case the taxable profit exceeds €1 million, only 50% of the remaining taxable profit may be used to set off losses. The losses which cannot be offset may be carried forward to the following year.

under the current at arm’s length principle it is possible to take a deduction in the Netherlands with respect to an intercompany transaction, regardless whether the affiliated party will include the corresponding income in its taxable base. This could result in a deduction in the Netherlands, while the other country does not or does not entirely include this income in its taxable base. On Budget Day 2020, the government announced that it will prepare a legislative proposal based on which the deduction of intercompany payments is made dependent upon the inclusion in the taxable base of the recipient. A bill regarding this subject is expected to be announced in the spring of 2021.

In the Netherlands, group companies can under certain conditions file one tax return as a so-called fiscal unity. Also on Budget Day 2020, the Dutch government published a letter in which it describes some of the guiding principles for a future Dutch fiscal unity regime. Some of these principles are: