Effective from 1 January 2019, IFRS 16 ‘Leasing’, brings fundamental changes to lease accounting that replace previous accounting that is considered no longer fit for purpose. This article [ 63 kb ] [ 63 kb ] looks into how you treat a variable lease payment in the financial statements of an interim period.

IFRS 16 requires a variable lease payment, provided it is not in-substance fixed or based on an index or rate, to be recognised in profit or loss in the period in which the triggering event or condition occurs. Therefore, you might assume that the same would apply in interim periods. In other words, a variable lease payment would only be recognised in the interim period in which the event that crystallises the payment occurs.

However, IAS 34.B7 requires a variable lease payment to be recognised if it is expected that the event will occur before the end of the current annual reporting period.

This appears to be a direct conflict between the two Standards. 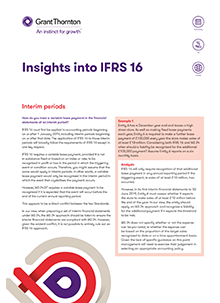 Entity A has a December year-end and leases a high street store. As well as making fixed lease payments each year, Entity A is required to make a further lease payment of £100,000 every year the store makes sales of at least £10 million. Considering both IFRS 16 and IAS 34 when should a liability be recognised for the additional £100,000 payment? Assume Entity A reports on a six-monthly basis.

IFRS 16 will only require recognition of that additional lease payment in any annual reporting period if the triggering event, ie sales of at least £10 million, has occurred.

However, in its first interim financial statements to 30 June 2019, Entity A must assess whether it expects the store to make sales of at least £10 million before the end of the year. In our view, the entity should apply an IAS 34 approach and recognise a liability for the additional payment if it expects the threshold to be met.

IAS 34 does not specify whether or not the expense can be pro-rated, ie whether the expense can be based on the proportion of the target sales recognised to date or on a time apportionment basis. Given the lack of specific guidance on this point management will need to exercise their judgement in selecting an appropriate accounting policy.

Entity A has a December year-end and leases a high street store for a four-year period. As well as making fixed lease payments each year, Entity A is required to make a further lease payment in year 4 of £200,000 if the store makes sales of at least £10 million over the first 3 years. At the start of the lease, Entity A believes the threshold will be exceeded at some point in the third year and therefore the amount will be payable. The liability is triggered in October of the third year. Considering both IFRS 16 and IAS 34 when should a liability be made for the £100,000 additional payment?

As with example 1 above, IFRS 16 will only require recognition of that additional lease payment in any annual reporting period if the triggering event, ie sales of at least £10 million, has occurred. This means the payment will be recorded in year 3 when the sales exceed £10 million.

However, in our view, IAS 34 will require Entity A to begin recognising a provision in the first interim period of the third year.

For both scenarios it is important to note that IAS 34 is a Standard relating to interim reports only and therefore should not influence how IFRS 16 is applied to the year-end financial report.