Bitcoin hits $10,000, what about cryptocurrency and taxes?

Is it a bubble or is this the future? You may have asked this yourself at one point. The discussion that divides the believers from those who remain sceptic goes on every single day. In the meantime however, the believers have yet another milestone to celebrate: Bitcoin has reached $10,000.

After a small dip in September (China wanted out), the rates have been climbing at a rapid pace. On October 12th, Bitcoin broke the $5,000 barrier and within two months, its price has doubled. Also, it is not just the general public who are aware of the potential importance of cryptocurrencies, even banks and a lot of big companies are entering the market. But what exactly are cryptocurrencies? And also important: which taxes could be due on cryptocurrencies?

What are cryptocurrencies and how do they work?

Cryptocurrency is a form of digital money that is designed to be secure and, in many cases, anonymous. Cryptocurrencies use decentralised technology to let users make secure payments and store money without the need to use their name or go through a bank. They run on a distributed public ledger called blockchain, which is a record of all transactions updated and held by currency holders. So when a transaction gets requested, it gets broadcast into a network where computers validate the transaction. When validated, the block gets added to the existing Blockchain and can no longer be altered and the transaction gets completed.

Cryptocurrency is still relatively new, developing at a rapid pace. This makes it incredibly challenging for legislators to keep their regulation up to date.

For personal income taxes cryptocurrency are considered assets and are to be declared in box 3 of the personal income tax as such, which is the box for income from savings and investments. This means you have to take its value on January 1st of the year and declare this value. From 2001 till 2016 the percentage of the fictitious profit was 4%. So until 2016 the tax to be paid was 4% * 30% = 1.2% of the taxable assets. As of 2017 this is changed, there are now 3 brackets. The more savings and investments you have, the higher the percentage will be. A part of the assets is taxed based on a fictitious profit of 1.63% and a part (or all the assets if you fall in the 3rd bracket) are taxed based on a fictitious profit of 5.39%. The tax rate is still 30%.

Cryptocurrencies are not seen as a legal currency. This means that VAT would in principle be due if they were seen as goods. However, the European Court of Justice has ruled that Bitcoins serve no other purpose than the fulfilling of payments and that there is no VAT due on the purchase or sale of Bitcoins (within Europe), despite not having the legal status of a currency.

Considering cryptocurrencies are still relatively new, its fiscal treatment is far from fully established. Currently, some clarification has been given, but it seems almost certain more legislation and jurisprudence will follow. If you have any questions in this respect, please contact the professionals of the Dutch International Tax Services team of Grant Thornton.

Should you have any queries in this regard, please feel free to contact us to discuss your specific issue in further detail. 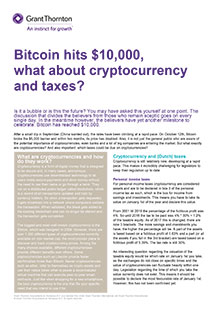 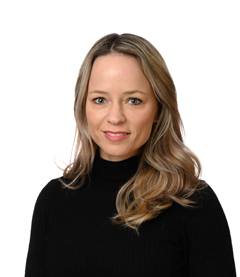