In late 2018, the Dutch parliament implemented the provisions of the first European Anti-Tax Avoidance Directive (ATAD 1) which entered into force on January 1, 2019. These rules aim to combat several possible tax avoidance structures, such as creating high deductible interest expenses or using controlled entities in low tax jurisdiction for certain transactions. Further, on July 2, 2019, the Dutch government published the legislative proposal on the implementation of the of the second European Anti-Tax Avoidance Directive (ATAD 2). This directive aims to combat tax avoidance by means of hybrid entities or hybrid instruments.

The legislative proposal is aimed at combatting hybrid mismatches in line with the provisions of ATAD 2. Hybrid mismatches could arise in case two (or more) jurisdictions

This could lead to two main categories of hybrid mismatches which could have tax advantages: 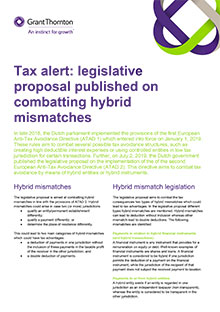