On 22 November 2018, the Dutch State Secretary of Finance proposed in a letter to the parliament new rules regarding the application and issue of tax rulings in the Netherlands. The idea behind this proposal is to improve the quality of tax rulings for companies with 'real economic activities'.

In the Netherlands companies that operate in more than one country can request for a tax ruling which provides these companies with certainty in advance regarding their taxable presence in the Netherlands. During the last couple of years, the Dutch tax ruling practice gained much attention. On November 22, 2018 the State Secretary has sent a letter to the Dutch parliament in which he announces new rules under which circumstances a company can request for a ruling and he clarifies the changes he wants to implement. 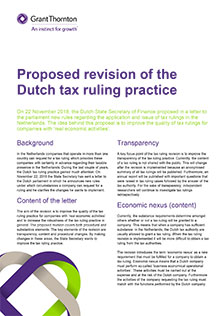